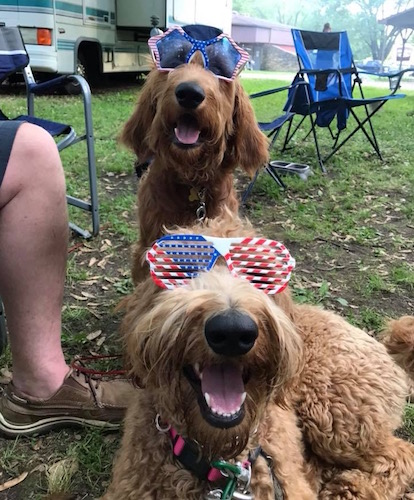 I can remember it like it was yesterday. I was so excited to be getting a Dalmatian. One of the most unique and beloved dog breeds of our time. I researched for hours and hours about the breed, waiting to pick the perfect puppy. “I’m going to do everything right!” I said. Little did I know, I was doomed to fail before I brought my puppy home.

The first few months were… great! Aside from zero sleep from barking and whining, and the typical puppy potty training issues, Remy was the dog of my dreams! She had so much personality and was full of life! Believe me… socialization was not an issue. Good luck taking a Dalmatian anywhere without being bombarded with attention!

If I knew anything it was that my Dalmatian would never become aggressive. Right?… Wrong! Around 12 months old my Dalmatian started showing signs of severe aggression. Not only that, but she had developed behavioral issues along the way. Barking, digging, bolting, jumping, and more had all begun to run its course. My wife was at her peak frustration when Remy saw a squirrel and pulled her into a tree while chasing it.

The peak frustration for me was when Remy obliterated a little boys winter jacket. He was crouched down beside his dad helping him change a tire. We couldn’t see them until it was too late. She took hold of the boys hood and start shaking it until stuffing burst out of it like the snow falling around us. The boy was probably scarred for life and the dad was quite upset! It was a real eye opener, as that little boy could have been seriously hurt or even killed. It would have been all my fault.

Sometime during all of this, my wife and I found out we were about to have a baby. We were so excited to become new parents! But naturally, we were concerned about our dog. “How did this happen?” I asked. “What is wrong with my dog?” I asked. “I did everything I was supposed to do.” I decided to contact other Dalmatian owners. I was hoping to find an answer as to what was wrong with my dog. The other Dalmatian owners told me to contact a behaviorist.

I decided to contact some professional dog behaviorists and trainers to help me. Virtually all of the trainers and behaviorists I talked with had told me that there was no hope to fix my Dalmatian. I would only be able to “manage” her aggression. They blamed the breed. They blamed her personality. They said she was just born to be aggressive. I was told I had two options: 1. surrender her to a shelter or 2. put her to sleep. Neither of these options seemed acceptable to me.

There are two schools of thought on discipline. People either love it or hate it. So I used my own logic, if positive reinforcement was the way to go, why didn’t it work? Maybe it’s not my dog… maybe it’s… me? After some more extensive research on discipline, I decided that I’d rather try disciplining my dog rather than give her away or even kill her! After about 6 weeks of training on my own, my Dalmatian was friendly and off-leash trustworthy.

My friends, family, and co-workers all watched in awe of the videos of her on Facebook. “Weren’t you ready to give her away, or put her down?” They asked. “She’s off-leash!? In less than a couple of months?!” They exclaimed. Eventually, word had made it around town that I was able to transform my dog within a fraction of the time that anyone else thought possible. Not only that, but she was better trained than any other dogs they had ever seen!

Do you know someone who’s dog needs training? Send them to this site!

← LEE’S DOG TRAINING TOUTED AS ‘BEST OF THE BEST’